A strong advocate of chart trading without using indicators. The point of view is not new, as it is the practice for majority of successful professional daytraders. It is, however, first time a book coming out to say that trading can be done with simpler and well defined trading plans based on several chart patterns only. I recommend this book to forex traders who find trading with indicators too confusing to follow.

END_OF_DOCUMENT_TOKEN_TO_BE_REPLACED 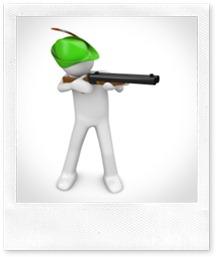 In trading, younger traders often feel pumped when they have to struggle through many trades during the day in order to come out ahead with a profit. For older traders the same struggle is exhausting and often giving them a headache. Over time if a trader has not moved on from liking the experience, this particular feeling towards the struggle itself will become a major obstacle blocking the trader from achieving better performance.

This sense of achievement from a prolonged struggle against something we deem bigger than we are, is originated from our ancient ancestors who hunt for food over a very long period of time. It is part of the animal instinct that we have inherited from them. It is the satisfaction coming from the animal instinct we have at taking out the preys after a dangerous fight.

It is a great tool in training someone to fight better and to survive dangerous situations. After all, it is risky business to hunt for a living. But it may not be such a good idea to be addicted to this gratification in trading.

Many traders perceive trading as a fight against something. In particular, fighting a market that is bigger, stronger, and quite unpredictable. No wonder many traders feel good if they have to struggle through a trading day with many setbacks and eventually coming out ahead with profit to spare. It is definitely a great accomplishment.

When this type of struggle happens too often, however, it is not something to be proud of. In fact, it tells you that your trading is not as efficient as it should be. You could be over trading due to your love of the struggle itself.

Just think about our ancient ancestors – they did not stick to the gruesome battles against the animals for long. The moment they figured out how to do it with lower risk and more efficient method, they went for that. Starting with better weapons and defensive tools, they got to hunt bigger animals by choice. Then they also built traps to capture animals without the need for them to be physically presence at the trap.

Traps that work require expertise in hunting the animals. Otherwise they would not work. In another words, the hunting skill was not abandoned. Instead it was utilized in a higher, abstract level to give the ancient hunters more in return.

These changes in the way animals are hunted allow the ancient hunters to secure food more consistently. Planning ahead with better strategies gave these ancient hunters an edge to capture more preys over the competing predators that were driven to hunt purely out of necessity (i.e. hunger).

Hunt As A Human

There is a striking parallel between these ancient hunters and modern traders.

Our ancestor hunters outgrew their own animal instinct from direct hunting. They developed planning and goal driven thinking. Their hunter instinct took over. They figured out that more food for the family with limited human power was way better than the risky maneuver of hunting large animals directly. The hunting skill was still important and obviously honoured among the tribesmen but it was applied in different ways like building traps. As oppose to be the only tool available, the hunting skill became the foundation of multiple survival tools passed down the generations.

Many traders apply their animal instinct in reading the tapes. They observe the markets for a period of time in front of their screens. It is normal to develop a sense of the rhythm of the market. They sense the potential changes and can enter trades to their advantage. They have developed the tape reading skill.

Relying solely on tape reading skill to make trading decisions at the heat of the moment all the time is an exhausting and demanding process. It requires total focus by the traders just like what the ancient hunters did when they were hunting.

It is a good thing to learn to read the tapes but it can only give you a slight advantage in the trading game. Over time if other trading skills are not developed properly, a trader will be stuck with the only skill they have with limited performance. More struggling every day, more likely the person will focus all the energy with tape reading and forget about developing better trading skills. It is the same as the ancient hunters who were hunting because of hunger and failed to plan for the future.

Learning from the successful ancient hunters, we know they did not always hunt by brute force. They used their cunning and wits to improve their hunting results. Their traps built for catching small animals are like traders who have developed good reliable trading setups that consistently extract small profits from the markets. There is no struggle against the market, just execution of well thought out plans for consistent results.

Just remind yourself, as a trader, that you hunt to make a living, not to engage in fights for satisfaction or gratification.

A decent trading psychology book with many interviews on well-known traders. Focus on daytrading with outline on the author’s unique approach to making trading decisions. Interesting read and everything still applicable even today.

The Day Trader’s Advantage: How to Move from One Winning Position to the Next
Written by Howard Abell