The all time classic combined with the excellent annotations done by Mr. Markman has modernized the book for the new generations of traders. This book is a must read.

Reminiscences of a Stock Operator: With New Commentary and Insights on the Life and Times of Jesse Livermore (Annotated Edition)
Written by Edwin Lefèvre, Jon D. Markman
Forward by Paul Tudor Jones

END_OF_DOCUMENT_TOKEN_TO_BE_REPLACED

Story At A Busy Pharmacy 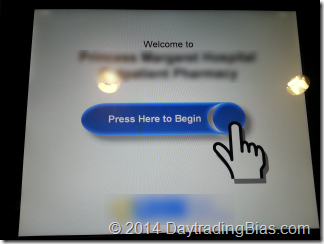 I went to this hospital pharmacy to pick up some special prescription. There were many people there. The place was jam packed. I thought it would be a very long wait. I was planning in my mind immediately on how to better spend the next 30 minutes to an hour.

Should I get a coffee?

Maybe I could find a spot to sit down?

I passed by this huge machine for people to obtain a ticket to secure their places in the queue. I did not take a ticket because it was designed for people to wait for their turn to drop off their prescriptions. When the medications were ready, they would join the other queue for medication pick up afterwards.

By the time it was my turn to talk to the cashier, I provided the information voluntarily. The nice lady at the cashier knew me for years and we chitchatted a bit. She found the medications quickly as it was prepared some time ago. She asked me to wait for a pharmacist to confirm the order before I leave. I said yes and relented my place to the next person in line.

Note: Having a pharmacist to double check the drugs first is not something out of the ordinary, it is a safety measure to ensure the correct medication is dispensed.

The Start Of A Fuss

Right after I settled at a corner in the packed waiting area, I heard this man complaining loudly why some people skipped the "queue" and got to see a pharmacist to pick up their drugs quickly and leave. Specifically, he was not happy that some people did not grab a ticket for their proper position in the queue. He was looking for the others to agree with him and obviously seeking a way to stir up the complain. Majority of the people ignored him. Yet some others who waited for a long time started to talk to him. They complained to each other and started their conspiracy theories on the reason why some people are taken care of first.

From their conversations, it was obvious to me that this old gentleman was a self-righteous person. He probably took pride in his life in following rules squarely and expected the others to do the same. Those people like me who did not get a ticket from the machine were labelled bad people. When things did not happen the way he expected to be, he could not control himself with frustrations and anger.

What he, and those who agreed with his complains, did not understand that there was the existence of two queues, not one.

My Turn And The Start Of An Episode

As expected, my turn has arrived quickly for me to see one of the pharmacists to pick up the medications.

Then all hell broke loose.

This old guy walked towards the booth I went to and started a very vocal complain. He made a speech of at least five minutes long. My guess was that he must be very proud of his comprehension skills. Clearly he spent at least 10 minutes to construct the speech in his head. Surprising to him, a very frustrated and borderline angry man, at every turn and twist he stopped, expecting the pharmacist and I to argue, we provided no feedback at all.

The non-response to his carefully crafted speech pushed him to his limit. He could not handle the blank stares and silence he was treated with. He started shouting. Security immediately arrived at the scene. That stopped this man. After all, he was a person with a self-righteous mind. A fight with the security guard probably would cross the line in his mind.

The pharmacist asked this man one question, "What’s the name on the prescription?"

The pharmacist returned with the status, "You walk in an hour ago dropping off the prescription. There are 10 more prescriptions to be filled before your wife’s. As you can see we are very busy here. We processed at least 50 prescriptions while you are here. If you call in with the prescription several days ago, you can pick up the medications like this gentleman here too."

The man was speechless. He was embarrassed. But more importantly, he could not accept the fact that he was wrong all along. The pharmacist told him to calm down and wait for his turn. The man walked back to the waiting area silently.

Security guard figured it was alright to get back to his normal post so he signalled us and left.

After the pharmacist double checked the drugs, I took the medications I was waiting for and left.

I did not try to find out what happened afterwards. I do not need to know.

What you may want to know, however, is the reason why the pharmacists and I were so calm in front of that man.

It is because we have seen it before, many times. I have my fair share of this kind of experience at the pharmacy, although not every encounter was as dramatic as this one. My guess is that the pharmacists must have seen this many many times.

Sometimes Ignorance Is Not A Bliss

The combination of ignorance and self-righteousness is bad for many situations. It is extremely bad for trading.

Take the example of the man I met in the pharmacy. That very small issue of people not taking the ticket from the queue machine ticked him off. His self-righteous mind took over. He could not even think logically to understand why that was the case. If he were more observant, he would be able to deduce that there were two queues. But he couldn’t because he felt he was wronged.

If there were one character trait I have to name that definitely kill the chance for a person in becoming a successful trader, self-righteousness is the one.

Being self-righteous will make a person takes pride in their acts. Pride stops logical thinking. Pride induces slack in discipline against adverse scenarios.

Countless traders thought that they understand the market fully and in total control of their trades. None of the traders whom I have met with this kind of mentality can survive beyond a few years of trading. Not only they lost enough money to stop them from trading, they are also broken mentally by the markets as they could not accept the fact that the markets were behaving in ways not agreeing with their beliefs.

Being self-righteous also induces anger and frustrations when things not happening in the way you think they should have. Negative emotions cloud one’s judgement. The more distress induced, the more likely mistakes would be made.

We all have our moment feeling being cheated by the markets. Countless times I stomped the ground (I was standing on the trading floor of the local exchange and trust me, only seniority gets you a spot to sit) and banged my screens. Maybe I am getting wiser. Maybe I just aged. Anyhow, I outgrew this phase long time ago.

Blaming the market for your losses would not help you get your money back. Learn to deal with the market and accept its probabilistic nature will.

The most interesting effect of self-righteous thinking is that it stops the traders from profiting in the markets because they cannot pull the trigger when the markets behaved in a way contradictory to their beliefs. I cannot remember how many times I have heard people saying the stock market should have crashed and the Fed should not push the market higher. It is a great conversion piece in a party but there is no room for such beliefs in one’s trading decisions.

When I questioned why, on one hand, they believe in the Fed is pushing the market higher; yet, on the other hand, they are not going long the stock market indices, I got back many interesting replies. Many do not have an answer to my question. For those who answered, some say it is wrong to do so. Some insist that staying short is the right thing to do. That is the sign of having self-righteous beliefs.

I don’t mind sharing my trading techniques and helping others to trade profitably. While trading, however, I have no problem taking money from people who place the comfort of feeling righteous on top of logical reasoning. They expressed their opinions and they chose to lose money.

Since I am trading to make money, I have no argument with them.

It is always the individual’s responsibility to learn to trade properly. In this case, however, the character weaknesses of some people stop them from applying common sense to trading. It is not possible to help them trade profitably until they realize their psychological issues.

Even if these individuals realize their beliefs are not good for trading, it will be a very difficult, if not impossible, journey to correct their minds. The reason lies in the fact that self-righteousness, by definition, means anyone suggesting self-righteousness is a problem is wrong. A barrier of this nature is not something that can be undone by simple interventional counselling or over-the-counter self-help materials.

Adam Grant, the youngest tenured processor at Wharton, talks about his book, Give and Take.

It is a long discussion of the ideas presented in the book. Be prepared to spend an hour on this.

This video strikes an important point in trading.

Many famous traders from the the past, those who went into the business back in 1980s, 1990s, etc. are now gone. Many of these traders are takers. They made it big and crashed spectacularly. Their trading styles are often guarded in secret. Their only interest in other traders are often stealing the secrets from them. The success of these traders also drove them to believe that they are superior to other traders. This very belief made them disconnected from the world and misunderstood how the world is changing. When their secret trading techniques no longer work, they do not know how to deal with the changes and fail miserably.

The ones who survived and still thriving are the ones who are givers. Their giving spirits helped them to stay in touch with the other traders and the trading community as a whole. This connection enables them to understand the transformation of the trading business. Thus giving them a feedback that the takers never have, allowing the more giving traders to be able to adapt to the ever changing trading landscape.

Speaking from personal experience, I find that sharing trading knowledge with others actually help me understand myself better, crystalize my thoughts and improve my understanding of the markets in ways I could never do alone. After all, markets are made up of people. Even bots are designed by humans.