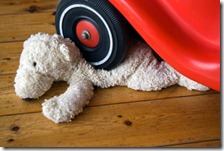 All common trading techniques with positive expectancies are likely triggered on confirmed basis, meaning that there is no top and bottom picking involved. Yet, almost all traders who learn to trade on their own would do so. This behaviour of picking price extremes is actually part of the human physiology that does not work to our advantage in trading. It is important to untrain this harmful behaviour or you will have great difficulty in becoming a consistently profitable trader.

Picking Tops and Bottoms Is Our Natural Choice

Some people seek excitement from trading. Being able to sell as close to the top or buy as close to the bottom is something that makes these individuals excited and gratified. These are thrill seekers, not traders. Eventually most of these people would leave trading due to funding depletion or that they have found something more exciting to do. They are exceptions so I will not focus on them for now.

Majority of people, however, are not thrill seekers. They start out trading with fear. Feeling uneasy and uncertain when placing orders to initiate each trade. After all, they are learning to trade.

This feeling is very similar to the first times we learn to drive. You do not know how much gas is needed to move forward nor how much pressure to apply onto the brake to stop the car in front of the red light. It takes time before we gather enough experience to do that properly.

Interestingly, this similarity in the learning experience of other skills drives us to pick tops and bottoms without us knowing. Let me explain what I mean.

The Need To Be In Control

In driving, we learn to stop in front of the red light if we see a red light is already on or that it is about to change into red light, say, from the yellow light. The decision making process in our brain is trained to act on potential conditions (like yellow light) as oppose to wait until the confirmed condition of switched into red light because it would be too late to stop by then. This anticipation of change works well and is necessary when we are dealing with the traffic light signals.

As we are trained in almost all kinds of daily activities to react on anticipation of events like traffic light changes, the kind with very consistent outcome, this habitual behaviour becomes our undoing in trading. We are just accustomed to anticipation and act on the first sign of almost anything in our lives. Once we have learned the basics of something new, we jump the gun and do what we think that is necessary to deal with the expected outcome. It makes us feel like we are in control.

But trading setups and signals are not the same as our everyday tasks that have (mostly) singular outcome. There can be many alternative outcomes given the same pre-conditions in trading. Acting too quickly on anticipation does not work well at all with trading.

The Reward We Can Hardly Resist

Logically, since we know that many confirmed setups have probability on your side with good risk reward ratio for your trades, it is supposed to be a no brainer to trade on confirmed signals only. Yet, most people find it very difficult to do even though they are aware of the advantage of having the odds in their favour over fading the extremes.

When we picked an extreme, we get instant gratification and the sense of security as price moves almost immediately in our way. We get this feel good sensation. Trading confirmed signals, however, do not give us that. Comparing the two choices, it is no wonder why we are physically attracted to the high risk action of picking extremes.

In another words, habitual top and bottom picking without logical justification is often our inability to resist the temptation of seeking adrenaline high. It is similar to gambling addiction – we all know what is bad for us but when we are doing it ourselves, we cannot see the problem and all kinds of excuses are made to justify our actions.

I think I make it sounds bad enough for now.